Coming from a family of musicians, Léo trained in Nice, Paris, Sweden (Paumier, Collin, D'Ascoli, Shereshevskaya, Mustonen & Karnarva). In 2017, he is unanimously admitted to the HEM in Geneva where he studies with Cédric Pescia and Gabor Nagy Takacs, in parallel with the Jaroussky Music Academy with David Kadouch. He was recently admitted to the Master's programme at the CNSM in Lyon with Laurent Cabasso. In the master class, he received the advice of the artists : Paul Badura-Skoda, Dang Thai Son, Maria-Joao Pires, Pavel Gililov, Louis Lortie, Alain Planès, Fred Hersch.

He won several prizes and distinctions: the international competition of Ile de France and the Philomuses Prize in Paris, the Steinway competition in Cannes and others. In addition to the piano, he has simultaneously studied the flute, cello, drums and writing. At the same time he works on historical pianos such as the pianoforte with Pierre Goy, and jazz piano with Marc Perrenoud.

Collaborating regularly with the composer Armando Ghidoni, who dedicates several concertos to him, which will be recorded soon. He premiered the concerto "Magical Concert" in Shanghai.

Léo Pensel continues his artistic life between Geneva and Lyon. He has a passion for pictorial art, opera, the study of languages such as German, English and Spanish, as well as baroque dance, which he practices regularly. He prepares international competitions, various artistic projects, and two discs: in solo repertoire and then with orchestra. 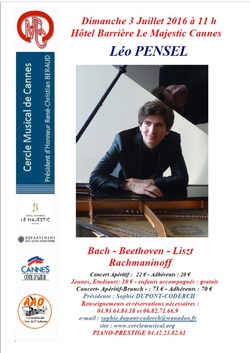